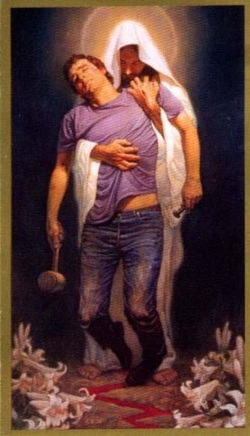 His Faithfulness
Can we boast, then, that we have done anything to be accepted by God? No, because our acquittal is not based on our good deeds. It is based on our faith. NLT Romans 3:27

Immediately Jesus stretched out His hand and took hold of him, and said to him, "You of little faith, why did you doubt?" NASB Matthew 14:31

And He said to them, "Because of the littleness of your faith; for truly I say to you, if you have faith the size of a mustard seed, you will say to this mountain, 'Move from here to there,' and it will move; and nothing will be impossible to you. NASB Matthew 17:20

This Good News tells us how God makes us right in his sight. This is accomplished from start to finish by faith. As the Scriptures say, "It is through faith that a righteous person has life." NLT Romans 1:17

So faith comes from hearing, and hearing by the word of Christ. NASB Romans 10:17

so that your faith would not rest on the wisdom of men, but on the power of God.  NASB 1 Corinthians 2:5

Now faith is the assurance of things hoped for, the conviction of things not seen.  NASB Hebrews 11:1

And without faith it is impossible to please Him, for he who comes to God must believe that He is and that He is a rewarder of those who seek Him. NASB Hebrew 11:6

But when you ask him, be sure that your faith is in God alone. Do not waver, for a person with divided loyalty is as unsettled as a wave of the sea that is blown and tossed by the wind. NLT James 1:6

And he did not do many miracles there because of their lack of faith. NIV Matthew 13:58

I tell you that He will bring about justice for them quickly. However, when the Son of Man comes, will He find faith on the earth?”  NASB Luke 18:8

Give a Reason for the Hope that is in Us

But in your hearts set apart Christ as Lord. Always be prepared to give an answer to everyone who asks you to give the reason for the hope that you have. But do this with gentleness and respect, NIV 1 Peter 3:15

The reason that we know that our faith is placed in something true is the resurection of Jesus.  The bible tells us that if Jesus was not raised from the dead then our faith is useless.  All our faith is backed by Jesus being raised from the dead.  Because of this, all that Jesus said was true, we can trust that God will do what He has promised to do.  All christian faith is built on this.
If you are looking for more information on proof of the resurection you can get the books; "More than a Carpenter", "Evidence that Demands a Verdict", or "The Case for Christ".  These books do a good job of setting up the information you should know about the resurection.

There is more than just the resurection to back our faith but it is the act of God that most strongly proves the faith.  The more is the testimony of the saints.  My story, your story and every believers story of how God has changed our lives.  We are called to be wittnesses.

Faith is often thought of as blind faith, meaning we have no logical reason to believe, we just feel it is true.  This falls into the stage of little faith.  People like this are not mature christians, but they are probably the most common (I still fall into this group, but God is growing all of us.)  So how do we move from little faith to great faith?  Jesus moved the disciples to great faith by discipling and living out what He taught.  He did not just talk about freedom in the kingdom.  He walked people through repentance and forgiveness, He healed people through the power of the Holy Spirit, He cast out demons and sickness.  Then He told his disciples to do the same and they did, though they struggled at times to do it.  Even after all this, they still doubted when He died on the cross.  When He rose from the dead they believed and had great faith.  Their faith was not a blind faith, they had experienced that trusting in God has real results.  They expected results, they did not just hope for them.
There is only one Holy Spirit and we have been given Him.  God can still do what He has done before, He can do so much more.  It is our faith in Him that limits what will get done.  Many are offended by this.

Strong's - pistis - G4102
Part of Speech - feminine noun
Root Word - From πείθω (G3982)
Biblical Use - 1) conviction of the truth of anything, belief; in the NT of a conviction or belief respecting man's relationship to God and divine things, generally with the included idea of trust and holy fervour born of faith and joined with it
a) relating to God
1) the conviction that God exists and is the creator and ruler of all things, the provider and bestower of eternal salvation through Christ
b) relating to Christ
1) a strong and welcome conviction or belief that Jesus is the Messiah, through whom we obtain eternal salvation in the kingdom of God
c) the religious beliefs of Christians
d) belief with the predominate idea of trust (or confidence) whether in God or in Christ, springing from faith in the same
2) fidelity, faithfulness
a) the character of one who can be relied on