Power in the Word
All Scripture is inspired by God and is useful to teach us what is true and to make us realize what is wrong in our lives. It straightens us out and teaches us to do what is right. It is God's way of preparing us in every way, fully equipped for every good thing God wants us to do. NLT 2 Timothy 3:16-17

All scripture [is] given by inspiration of God, and [is] profitable for doctrine, for reproof, for correction, for instruction in righteousness: That the man of God may be perfect, throughly furnished unto all good works. 2 KJV Timothy 3:16-17

I will worship toward thy holy temple, and praise thy name for thy lovingkindness and for thy truth: for thou hast magnified thy word above all thy name. KJV Psalm 138:2
Can we trust the bible to guide us?
God said that His word has been given to us to lead us into the truth.  He has made His word more important than what people believe about Him.  The bible teaches us the way to salvation.  Do you think that God would allow His word to be corrupted so that people could not be saved?  The answer is no, God has made sure that His word is available to all of us.

Where did we get the bible?
Old Testament - This is the history of God's relationship with the Jewish nation.  It is made up of History, Poetry and the Prophet's messages.  The question is can it be trusted as a message from God.  The answer is in the prophecies.  Only God could tell us about stuff that was going to happen in detail before it happens.  Some claim that the prophecies were added after the event happen, but we have copies of the text that by carbon dating have shown themselves to be older than the event.  So the next question is have the text been altered.  We have found ancient copies that show themselves to be almost the exact same in wording as our moderned copies we have today.  (Note: the originals were in Hebrew and Aramaic.)  The ancient scribes would also make sure not to change the text.  Going to the extream of not correcting misspelled words and making notes that the words were misspelled.
New Testament - The New Testament was written in about sixty years.  It was written by eyewittnesses to the events that they cover.  When it was written many of the people that were eyewittnesses where still living, but no one that was a eyewittness ever claimed that the accounts were untrue.  Only people who were not there claimed that the stories were false.  That would not hold up in court, but for many that is all they go on.

How do we know we got the right books (66 of them) in the bible?
By the start of the second century the books that we have were in common use in the church.  I have heard that in 1445 the Catholic Church had a meeting (The Council of Trent) and they set up which books were allowed.  They just agreed on the books already in use.  Like I said the books that are in the bible have been in use since the second century.  These books have no false information in the original text.  Also the writers that the books claim to be the arthurs are truly the arthurs.  The teachings that are in each book do not go against the teachings in a different book of the bible.  The "new" gospels that are showing up don't measure up to these standards.

The law (rules given to us by God) does several things for us.  It teaches us about rigtheousness, about God's heart and standards, and it humbles us.  The law is ment to send us to the cross of Jesus, crying out for God's mercy.  We can not live up to God's standards out of our own capabilities.  But that does not mean that the laws purpose ends once we have accepted God's gift of salvation.  The word still instructs us.  The Holy Spirit can clean our hearts if we let Him.  From a pure heart, empowered by the Holy Spirit a saint can live out the intent of the law from the heart.  Love God, then love others like you love yourself.   The enemy has done all he can to keep us from believeing/doing this. 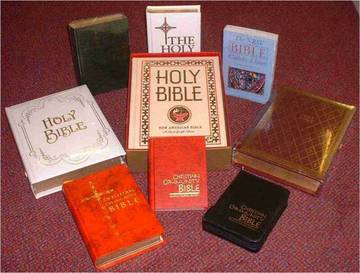 What is the difference between the versions that are in use today?  When translating the bible their are two approches, the word for word (typically harder to read) and the thought for thought (easier to understand).  There are other types of bibles which include the paraphrase (This is done like a thought for thought but is not a translation as much as a persons understanding of what the bible says) and then there are other bibles (this a group I made up to hold bibles that have more than 66 books that are in the King James Version or have has the meaning of some verses changed.)

KJV - King James Version - Of the bibles written in english, this is the oldest that is commonly used.  It has been in use for over 400 years.  In that time it has been corrected over 7000 times, to make it match the source text.    It is in my opinion a necessary version of the bible for anyone doing bible studies. If you don't have a KJV bible to referance then your bible studies will be lacking.  I am not a KJV only person.  If it were not for the newer versions of the bible I would have never read the bible.  But no other version of the bible has stood the test of time for so long.  I can not help but see God's hand in the writting of the KJV.

NKJV - New King James Version - This is a good bible for those that trust the KJV but have a hard time understanding the KJV.  Just a warning, it does not match the KJV in exact meaning of every verse.

NASB - New American Standard Bible - This is known as one of the better modern translations.  It is good for word studies.  It is one of my personal favorites.

NIV - New International Bible - I have seen people group this bible as a thought for thought bible and a word for word.  The translaters were trying to find the middle ground between being readable and being accurate.  This is written at a 7th grade reading level.

HCSB - Holman's Christian Standard Bible - Like the NIV this bible tries to walk the middle road of WfW and TfT.

NLT - New Living Translation - This is written at a 5th grade reading level.  It is easy to read and understand, but it is not good for word studies.